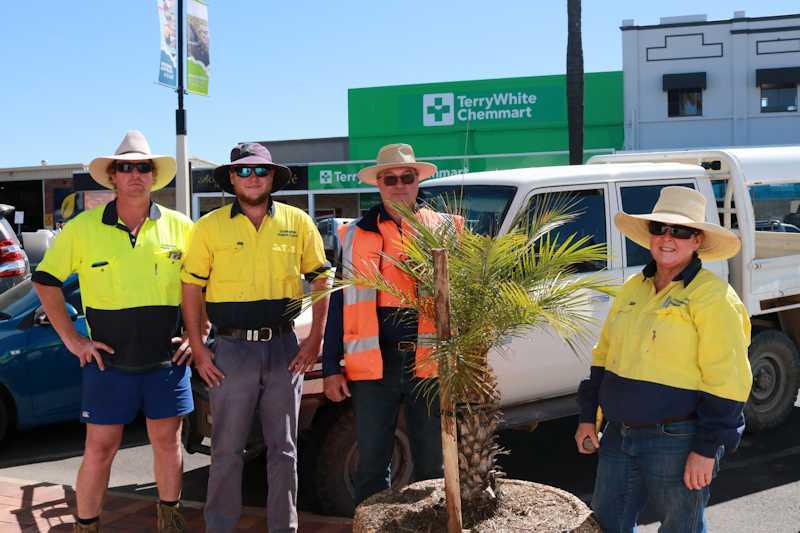 Goondiwindi Regional Council Mayor Graeme Scheu has described the damage to several palm trees on Marshall Street as “a stupid act of vandalism”.

Unfortunately for the perpetrator, the whole incident was captured on CCTV footage and the Goondiwindi Police have already identified and charged the individual involved.

The perpetrator has agreed to pay the costs of replacing the damaged plants.

“Our staff work very hard to present our towns in such a pleasant way and it just makes me wild to see their work disrespected in this way,” Cr Scheu said.

The vandal targeted palm trees in the planters on Marshall Street on Saturday night between 10 PM – 11 PM. Three plants were completely snapped off at the roots with several others less severely damaged.

A number of local businesses collaborated with Council and the Goondiwindi Police to share CCTV footage of the incident and were successfully able to identify the offender. The incident comes after Council recently invested in 26 more security cameras across public places and Council-owned facilities in the Goondiwindi town area.

The investment was in response to community requests for greater coverage across the CBD. Council worked with local businesses in town to map the existing CCTV coverage and to determine which areas would be prioritised for the new cameras.

Cr Scheu said the project would help ensure that incidents like these are not able to slip through the net.

“I am so pleased that we managed to get camera footage of the culprits,” the Mayor said.

“I understand that the Goondiwindi Police have already identified and charged the individual involved as a result of some co-operation from witnesses. I thank the Police for their quick action in that regard.”

Goondiwindi Regional Council’s Parks and Gardens team has already taken action to repair the damaged palm trees temporarily before they are replaced.

“I just wish that this bloke’s mates had the courage on the night to tell him to pull his head in and not damage them in the first place,” Cr Scheu said.