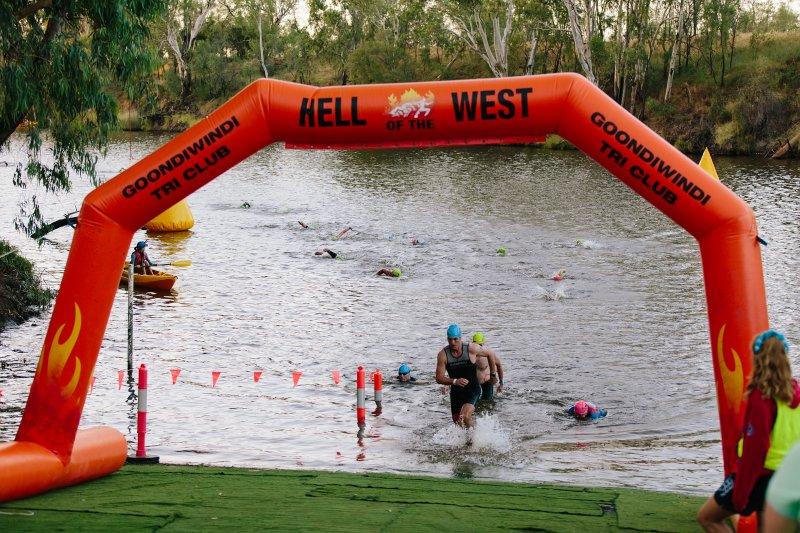 Goondiwindi region is warming up for the Festival of Hell

The Hell of the West has been running, and cycling, and swimming, for 29 years. In that time, it’s not missed a single beat – and the committee says it certainly doesn’t plan to start now.

The water level in the mighty Macintyre River may be the lowest it has been in those years, but Festival of Hell Race Director Tim Richards says that’s not enough to phase the toughest triathlon in Queensland.

“The message is that Hell of the West will go ahead like any other year,” Mr Richards said. “Like any other triathlon, we have a plan B and even a plan C.”

The committee will be working with WaterNSW, the Queensland Government’s Department of Natural Resources, Mines and Energy and Goondiwindi Regional Council in the lead-up to the Festival of Hell weekend to monitor the level and water quality of the river. Mr Richards said the committee would continue to keep competitors and supporters updated.

“So far, after talking to local authorities we are confident there will be enough water for the swim section to go ahead,” he said.

The river has historically posed the opposite problem to the triathlon committee, with alternative arrangements needing to be made in previous years due to flood.

“We usually had to make arrangements due to flood and in those cases we’ve shifted to the Botanic Gardens in the past,” Mr Richards said. “This is the first time we’ve had the opposite problem where the river level is low.”

The 2020 event will also be the first of the weekend’s new brand as ‘The Festival of Hell.’ The festival will be held over 8-9th February and will encompass the Barambah Organics Hell of the West triathlon and the GTH+ Super Saturday, providing inclusive events for all levels of fitness and age. There will be events for every level of athlete, from kids to beginners to some of the world’s best.

“We’ve already had over 200 entries sign up so we’re well on track and it’s already shaping up to be a great weekend,” Mr Richards said. “We really want to thank our sponsors for helping to make this happen – especially our new primary sponsor Barambah Organics and GTH Group +, who have supported us for the last three years.”

Goondiwindi Regional Council has proudly been a long-term sponsor of the event. Mayor Graeme Scheu said the Hell of the West was one of the “top-tier”, major events in the region for tourism.

“There’s no doubt what a fantastic boost this is to the region,” Cr Scheu said. “Council is doing all it can to work with the committee to ensure everything goes ahead without a hitch.”

The support from the local community was a major part of what made the weekend so fantastic, Mr Richards said. “We already have a lot of local entries which is really good and we have community groups ready to go. We usually see around 300 volunteers at the weekend itself.

“If anything, making sure we go ahead as normal is even more important during this dry time. We’ve survived floods in the past and we can survive this drought. So save the date for the Festival of Hell and let’s show our great town some support.”

Goondiwindi region is warming up for the Festival of Hell