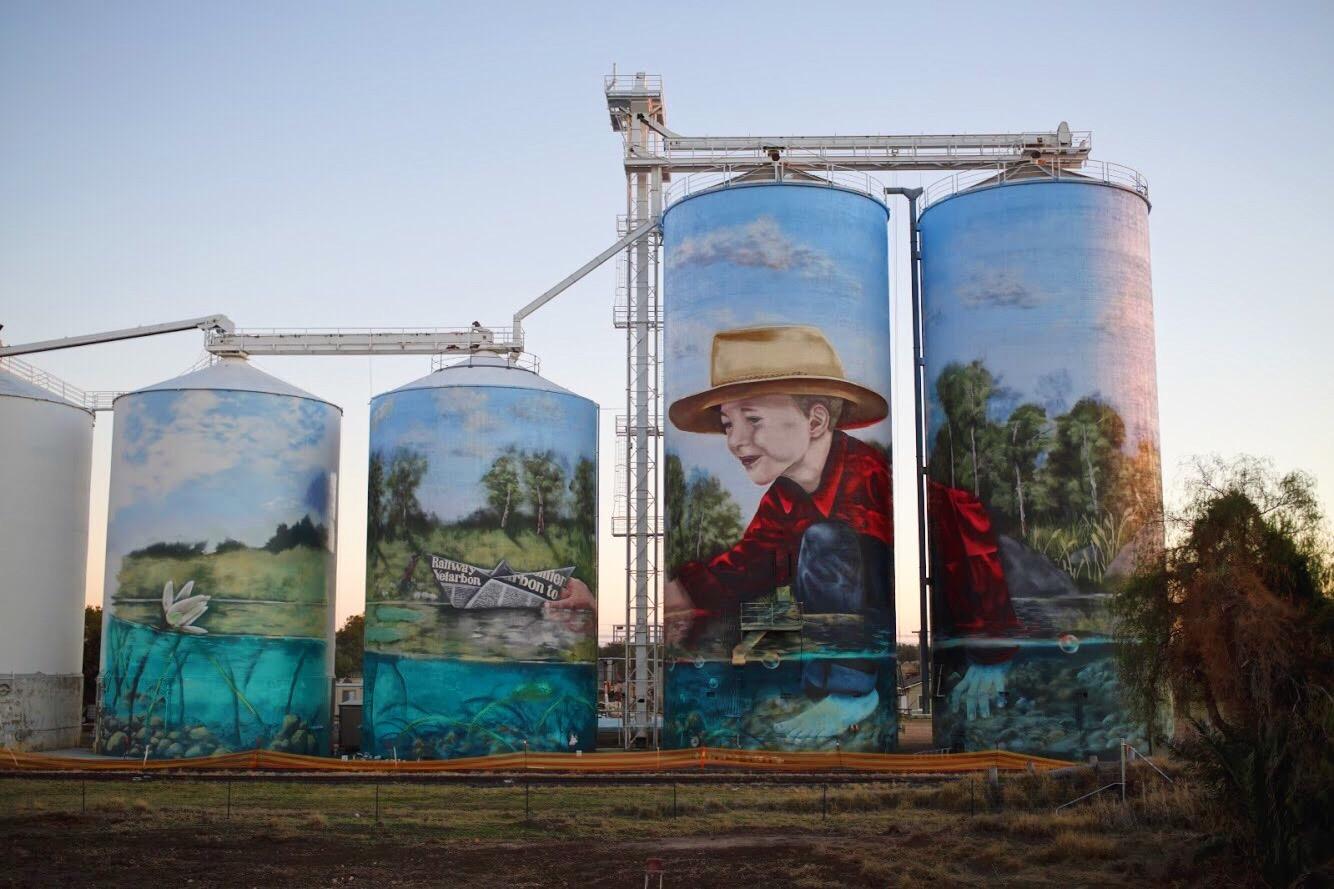 The small township of Yelarbon in the Goondiwindi region has been given the green light for the final stage of what will become one of the largest silo murals in the country.

The first stage of the artwork, titled “When the Rains Come”, was painted across four silos in June last year. Now, new State Government funding will allow for the remaining silos to be painted of the 96m-long mural in 2020. The total painted area of the impressive panorama will span more than 1,800m2, making the GrainCorp Silos at Yelarbon one of the largest silo artworks in Australia.

Mayor of the Goondiwindi region Graeme Scheu said Council is now negotiating with the artists, GrainCorp and Queensland Rail to determine a start date for the project.

Brisbane-based artist collaborative the Brightsiders Group will return to Yelarbon to pick up where they left off for the final stage of the project. The final few silos of “When the Rains Come” will complete their vision of an iconic lagoon scene filled with some of the area’s distinct water lilies, bird species and other wildlife.

The Queensland Government through the Department of Innovation and Tourism Industry Development has allocated an $80,000 grant to complete the project. Goondiwindi Regional Council Mayor Graeme Scheu said the funding was a huge win for the Yelarbon community, which is currently in the middle of the worst droughts on record in the Murray-Darling Basin.

“We’ve recently seen that the Thallon silos recently got the top prize at the Australian Street Art Awards – I think this shows that rural art is gaining recognition and what an impact that can have on a small community,” Cr Scheu said.

Tourism Industry Development Minister Kate Jones said the project at the GrainCorp silos at Yelarbon would deliver a great boost to the local tourism industry.

“The latest research shows tourists come to Queensland to experience something they can’t get anywhere else,” she said.

“Yelarbon is perfectly positioned along the Cunningham Highway, making this artwork a great pit stop for drive tourists.

“By partnering with Council, we’re delivering a unique attraction that will help to drive visitors to Goondiwindi with great flow-on benefits for local businesses.”

Cr Scheu said the GrainCorp Silos at Yelarbon are in a prime position to capitalise on the growing silo art trail in southeast Queensland.

The project is also a big opportunity for the region, Cr Scheu said, as visitors can only access Yelarbon via either Goondiwindi or Inglewood.

“That means the tourism dollar from this one project can potentially be spread across the region,” the Mayor said.

“We don’t know that it gets much bigger than this and it’s certainly one of the biggest [silo artworks] that we’re aware of. Its layout as one enormous panoramic image is certainly different to others and the sheer size of painted area is just huge.

“The optimism and ambition of this project for our community is needed now more than ever as our wait for rain gets longer and longer. The first stage is already proving to be a hit on the national silo art trail so it’ll be really good to see what visitors think of the final product.

“It will also be great to have the Brightsiders back in town – I know they were really active in the community the last time they were here so I’m sure they will be welcomed back as old friends,” Cr Scheu said.

The project is expected to be completed by mid-2020.