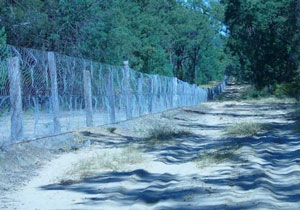 Goondiwindi Regional Council is responsible for approximately 283km of the Wild Dog Check Fence at an annual cost of approximately $430,000 including depreciation.

Goondiwindi Regional Council offers a Bounty of $100 per dog, captured on the ‘clean’ side of the barrier fence.

The baiting programs for the Inglewood area is during April and for the Goondiwindi area during July. Council will supply 100 meat baits at no cost during the Autumn baiting.

Landholders supply meat for the Spring baiting program which is held during September for both Inglewood and Goondiwindi areas. 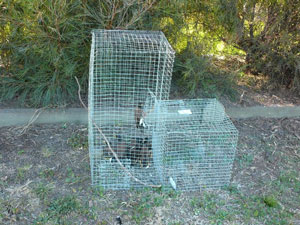 Goondiwindi Regional Council (GRC) has received numerous inquires about the increasing numbers of Indian Mynas in the GRC area.

Noisy, territorially aggressive, and not afraid of humans, Indian Mynas hang out in flocks from 5 to 20, and can be very long-lived.

These birds are seriously bad news for our native birds and other small animals. They are fiercely territorial and use their superior numbers to aggressively defend their territory.  During the breeding season they take over tree hollows from native birds and small animals (such as sugar gliders) after harassing and evicting them. They build and defend several nests during the breeding season although they only use one nest — this excludes native hollow nesting birds and animals from those nesting sites. They kill chicks and destroy the eggs of native birds. 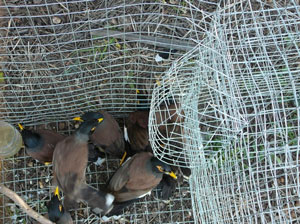 After finding plans on the internet of how to make a trap, Councils Natural Resource Management Officer, Nathan Stephenson, has made a trap and been quite successful in trapping a number of birds.  "Materials are quite cheap and the trap is quite simple to make". Nathan said.

For plans of the trap and trapping tips (click on the links below):

It is unlikely to totally eliminate Indian Mynas from the GRC environment. However, with a concerted, coordinated and sustained effort, we believe a significant impact can be made on the Indian Myna population in the region, thereby helping to protect our native birds and small mammals.